This project is made for a competition, which I received grand prize. The key objective of this challenge is to build a machine learning model that handles given data set, with the most suitable encoding schemes and the least set of feature variables. Also, it requires no correlated variables in the set of predictors. The model should be built based on the Challenge dataset, and to predict the observations in Evaluation dataset.

Here is a data sample for Challenge dataset.

From the table, you can see the 5 levels are nearly evenly distributed in both datasets. Later, We will transform this categorical variable by replacing each level with their related the average of response “y”.

For this project, we proposed a novel hybrid model, which is a combination of neural network and LightGBM (NN +lightGBM). Here are my motivations on combining those two models

Overall, the instability of the single model prediction and the shallow model’s unsatisfactory data feature mining inspired me to move toward deep learning and ensemble learning. Hence, we decided to adopt this fusion model. This model has shown promising performance in terms of the F1 score.

The model pipeline can be divided into three parts

In this part, the data is divided into test, training and validation set randomly with ratio, 2:6:2. Meanwhile, all sets’ variable “XC” is transformed into numerical type, by replacing that level with the average of “Y” under that level in the training set. This transformation will be applied to all sets, including the Evaluation dataset.

This part has 3 steps.

Step 2- Exact features by neural networks:After obtaining important features, this pipeline will generate new features from those selected features, by extracting the last hidden layers from a neural network built on a training set. The hyperparameters of this neural network were tuned by grid-searching in the validation set. Finally, the training, test, validation and Evaluation set will be transformed with the last hidden layers to get new features. Notice all observations from all sets are normalized based on the training set.

Step 3- LightGBM tuning and testing:After combining selected features and extracted features from step 1 and 2, the transformed training and validation data will be used for training and hyperparameter tuning. The tuned model will be saved for later deployment.

The overall operations on the Evaluation data:

The pipeline will load the saved model to predict the label for the transformed Evaluation dataset. 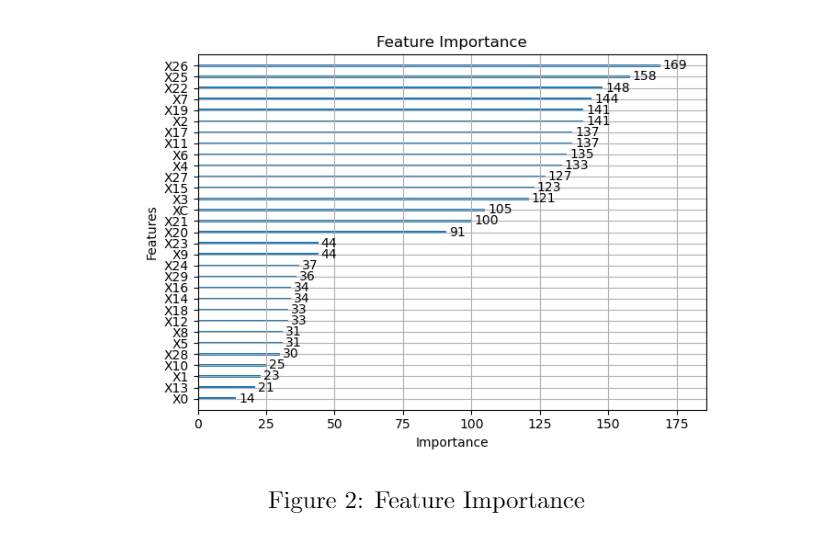 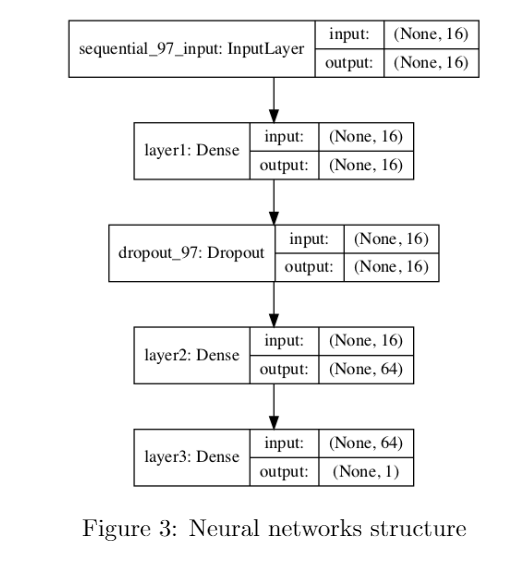 The hyperparameters of the NN include the size of the neurons, the activation function and the drop-out rates. The output layer uses sigmoid function, thus for each sample, it predicts a value between 0 to 1 – the probability that this sample belongs to class 1.

For testing purposes, we run the model for 146 times. For getting a convincing result, in each run, the pipeline will randomly split the training, test, and validation dataset. Also, for all models’ hyperparameters and feature sets will be refitted, and reselected. As a comparison to NN+lightGBM, the prediction results from the neural network, which used to generate features, were also recorded. Figure 4 shows the distribution of the F1 score from all runs. Both model’s averaged F1-scores are above 0.95, but NN+lightGBM has better performance overall and has a lower standard deviation in F1-scores. Thus NN+lightGBM is a more robust model compared to NN. It also means if you are willing to sacrifice some F1-score, you can use the trained neural network to predict for gaining some efficiency. 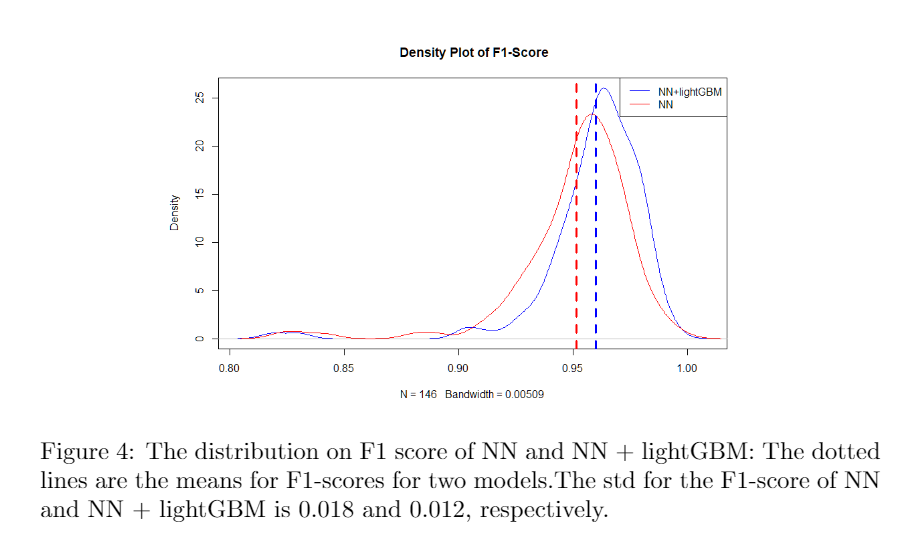 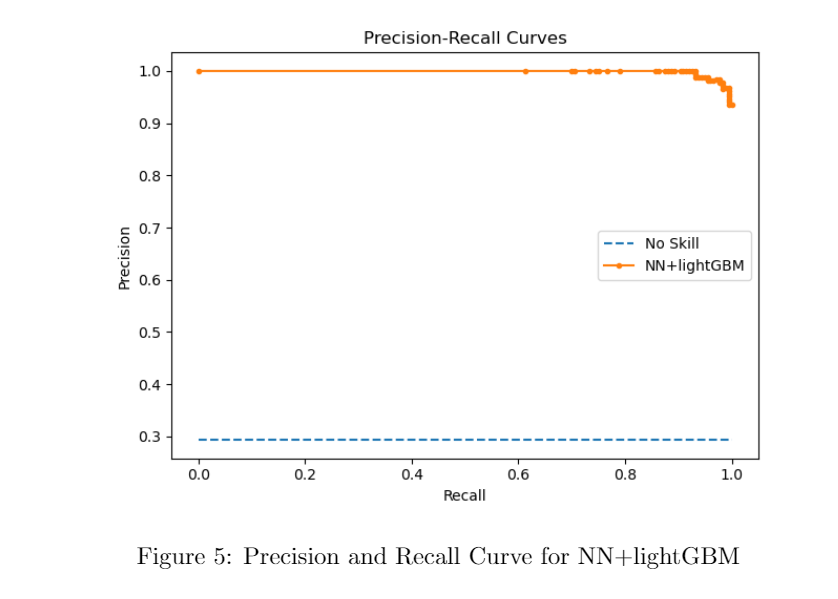 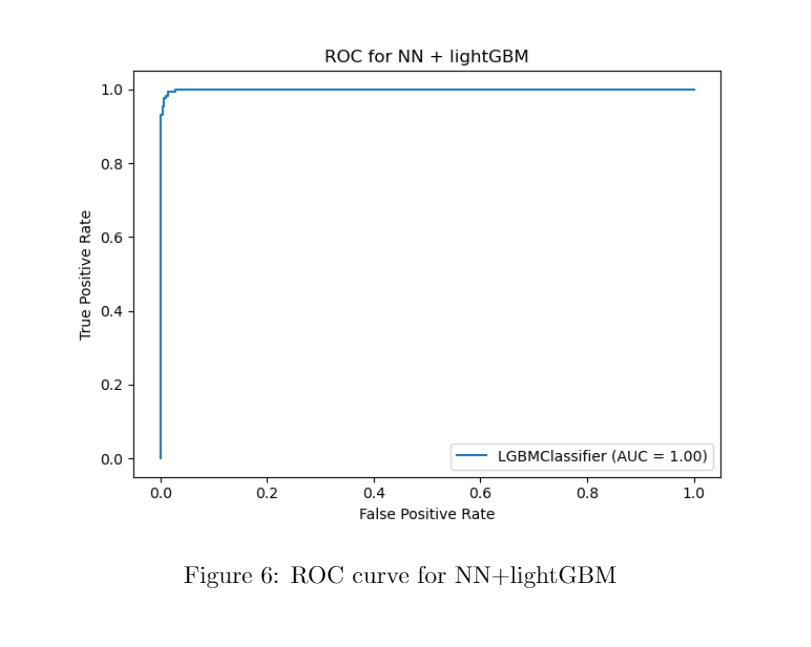 Here is the precision and recall curve on one run. The area under the curve gets to 0.998. Therefore, the model performs extremely well under the imbalance situation. we also attached a ROC curve as a comparison. In terms of limitation of the model, there is a potential risk to have overfitting, since we are using neural network and lightGBM. Also, it is hard to interpret the newly extracted features by the neural networks.

The related code can be found from here