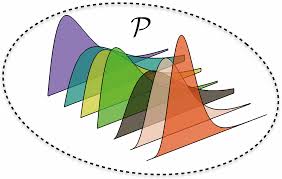 Based on the choice of whether people allow their decisions to be dependent on the revealed information or not, there can be two kinds of decisions.

Here-and-now decision: Those decisions should be made as a result of solving the problem before the actual data “reveals itself” and as such should be independent of the actual values of the data.

Wait-and-see decisions: Those decisions could be made after the controlled system “starts to live,” at time instants when part (or all) of the true data is revealed. It is fully legitimate to allow for these decisions to depend on the part of the data that indeed “reveals itself” before the decision should be made.

For a better understanding of the formulation of adjusted robust multistage optimization, let’s consider a general-type uncertain optimization problem-a collection

of instances - optimization problems of the form

Now, we want to adjust the robust counterpart so that we can corporate the wait-and-see decisions into the decision making process.

From the computational viewpoint, solving a robust multi-stage linear programming model is NP-hard[4]. The reason comes from the fact that the ARC is typically severely computationally intractable. The equation (4) is an infinite-dimensional problem, where one wants to optimize over functions -decision rules- rather than vectors, and these functions, in general, depend on many real variables. Seemingly the only option here is sticking to a chosen in advance parametric family of decision rules, like piece-wise constant/linear/quadratic functions of \(P_j(\xi)\) with simple domains of the pieces. With this approach, a candidate decision rule is identified by the vector of values of the associated parameters, and the ARC becomes a finite-dimensional problem, the parameters being our new decision variables. This approach is indeed possible and in fact will be the focus of what follows.

The simplest type of policy to consider is a static one, whereby all future decisions are constant and independent of the intermediate observations. Such policies do not increase the underlying complexity of the decision problem, and often they result in tractable robust counterparts. For instance, this kind of policy can be optimal for LPs with row-wise uncertainty. Here is an example \[P=\{min_x\{c^T_\xi x+d_\xi:a^T_{i\xi}x\leq b_{i\xi},i=1,...,m\}:\xi\in \Xi\}\]

where where \(c^j_{\xi}\)is j-th entry in \(c_\xi\) , and \(A^j_\xi\) is j-th column of \(A_\xi\) . Note that the variables in this problem are t and the coefficients \(p_j,q_j\) of the affine decision rules (6). As such, these variables do not specify uniquely the actual decisions \(x_j\); these decisions are uniquely defined by these coefficients and the corresponding portions \(P_j\xi\) of the true data once revealed.

For illustration, you can take a look on section 5.3.4 on one of the reference books Robust Optimization. That is a example on applying AARC to a simple multi-product multi-period inventory model.

It is to be expected that in the general case, applying affine decision rules will generate suboptimal policies compared to fully adjustable ones. Thus, one might be tempted to investigate whether tighter conservative approximations can be obtained by employing more sophisticated (yet tractable) decision rules, in particular, nonlinear ones. Below are some examples of how this can be achieved by taking piecewise affine decision rules. === K Adaptability=== Consider now a multi-stage optimization where the future stage decisions are subject to integer constraints. The framework introduced above cannot address such a setup, since the later stage policies, \(X_j(P_j\xi)\), are necessarily continuous functions of the uncertainty. The setting of K Adaptability is to deal with the situation mentioned in the previous section. It is introduced here: Finite Adaptability in Multistage Linear Optimization

Here is an example. Let’s start with a simple case, i.e., the two-stage Robust optimization. Suppose the second -stage variables,\(x_2=X_2(P_2\xi)\), are piecewise constant functions of the uncertainty, with k pieces. Due to the inherent finiteness of the framework, the resulting formulation can accommodate discrete variables. In addition, the level of adaptability can be adjusted by changing the number of pieces in the piecewise constant second stage variables. Consider a two-stage problem of the form

The complexity of K adaptability is in finding a suitable partition of the uncertainty. In general, computing the optimal partition even into two regions is NP-hard. However, we also have the following positive complexity result. It says that if any one of the three quantities:(a) Dimension of the uncertainty; (b) Dimension of the decision-space; and (c ) Number of uncertain constraints, is small, then computing the optimal 2-piecewise constant second stage policy can be done efficiently.

Although decision rules have been established as the preferred solution method for addressing multistage adaptive optimization problems. However, previously mentioned methods cannot efficiently design binary decision rules for multistage problems with a large number of stages, and most of those decision rules are constrained by their a prior design. In 2014, Dimitris Bertsimas and Angelos Georghiou proposed a new designing way to address those problems. In their papers, they derive the structure for optimal decision rules involving continuous and binary variables as piecewise linear and piecewise constant functions, respectively. Then, they propose a methodology for the optimal design of such decision rules with finite pieces and solve the problem using mixed integer optimization. For more details, You can find paper here

5 An Example on Inventory Management

Then, one might consider that at each point of time, the inventory manager can observe all of the prior demand before placing an order for the next stage. This could apply, for instance, to the case when the entire unmet demand from customers is backlogged, so censoring of observations never arises. Then, the sequence of decision variables and observations can be defined as follows